I thought it was time for another one of my magical manifestation stories.

I just love the way the Universe can deliver when we clearly state something we desire, and promptly release all attachment to it. Don't you?

One Sunday night, my Sweetie and I were watching the Harrison Ford “Fugitive” movie.  Since the movie takes place in Chicago, I look over and ask Sweetie, “How long has it been since you’ve been to Chicago?”  His reply was “Years”.  I agreed it had been quite a few years since I had been there also, so I suggested we plan us a little trip there together.  He agreed.  We continued watching the movie without further ado.

The next day on our way home from the shop, we decide to stop by Goodwill and take a look around, see if anything caught our eye.

As we were wandering through the aisles Steely Dan’s “Hey Nineteen”, began to play on their sound system.  Sweetie and I are big Steely Dan fans so we were enjoying their choice of music.  Sweetie made a comment that it sure would be fun to go see Steely Dan again soon. I agreed.

About that time, Sweetie’s phone rings and it’s a friend we had met several years ago who shares our love of great concerts and his first question was, “What are you guys doing Labor Day weekend?”  No plans at the moment, Sweetie replied.

After a brief pause, Sweetie turns to me and says, “He wants to know if we would like to go see Steely Dan in Chicago Labor Day weekend?”  Without missing a beat, I said, “Yes, we would! We just said we wanted to plan a little trip to Chicago last night, and you just said it would be fun to see Steely Dan in concert again, of course!”

Wow, how amazing is that?

Two weeks later our friend calls again to see if we are attending a certain concert, (Heaven and Hell) the next day in Cincinnati. If we were, he would meet up with us there (he lives 200 miles from us), and give us the Steely Dan tickets.

We hadn’t even known the Heaven and Hell concert was even happening but said if we could get some tickets for it, we would be there. Sounds like fun.

I go to Ticketmaster to see if any tickets are available and miraculously bought two, second row center, pit tickets for cover price.  Wow, that was lucky.

The next day we drive the 150 miles to the show and meet up with our friend.
He tells us about winning seventh row tickets to see Steely Dan at the Chicago Theatre five nights in a row.

Since he already had tickets for the Friday night show and wanted to sit with some other friends, he was happy to give these tickets to us if we promised to go.  Chicago is about a 500 mile drive for us.  We promised we would be there.

As he walked away, Sweetie turns to me and asks, “How are we going to afford a trip to Chicago so soon?  We need money for gas, the hotel, and food.”  I told him not to worry, we would go, somehow, some way.

At that moment a guy walks by and the back of his t-shirt said KEEP THE FAITH. I told Sweetie, “Look, it’s a sign!”  “No, he replied, it’s just a Judas Priest concert shirt.”  I repeated, “It’s a sign!” I was going to keep the faith. 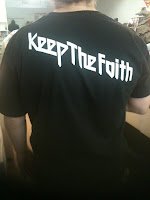 The Heaven and Hell concert was lots of fun, our seats were awesome and Sweetie even got a Tony Iommi guitar pic.

The next day I was back at the shop, selling my comics, when I got an excited call from my daughter.  Seems the mailman had just delivered a priority envelope for me.  Inside was notification that I had just won a $500 American Express gift card, which was enclosed.

That card paid for the entire trip and we even stayed at the Wit Hotel, just around the corner from the Chicago Theatre. 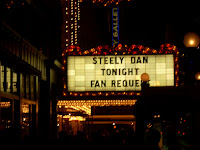 The Wit had some delicious cookies, we had an awesome meal at an Irish pub, we went down to the Field Museum, and took in some sights.

What a fun weekend in the Windy City! That Steely Dan concert was one of the best we have attended so far, and as a bonus, had a special guest appearance by Larry Carlton playing guitar.

Whenever I know what I want, keep the faith, and trust the Universe to figure out the 'hows', it's always amazing.

Here's to your lucky life!

It's Law of Attraction for Your Lucky Life!