Since last week's post was about beating the drum of my ideal concert experience, I thought I would share one of my earliest ones, which is also my very first experience in deliberately using visualization.

It made a believer out of me. 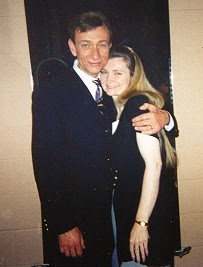 I have loved the old Etta James song, “At Last” from the first moment I heard it.

During the deepest, darkest, period of my life, I heard Bobby Caldwell’s version, from his album “Soul Survivor”, for the first time, and it brought tears to my eyes. Okay, I’ll admit, I cried like a baby.  I listened to it over and over and I felt as though it warmed my soul.

A few months later, I was feeling very low. My daughter and I were homeless, my business’ store front had been crashed in by a drunk driver, and sales had plummeted.  Truth is I was very depressed.

My mother suggested I do something to lift my spirits.  Why not go see this Bobby Caldwell guy in concert? So I looked him up and found out he was doing a show in a city about 275 miles away.  Mom agreed to take care of my daughter and my shop, and I drove the five hours to the show.

Bobby Caldwell had his eighteen piece big band with him and it was a great concert.  It definitely lifted my spirits and I even stuck around after the show, talking to a couple of the band members, got my CD’s autographed by Mr. Caldwell and even had a picture taken with him. But he never sang “At Last”.

When I got home and had my film developed, the photo turned out really well, so I mailed it to Mr. Caldwell in California and asked him to sign it for me.

A few life changing months went by, and in my quest to "change my thoughts and change my life" I read a book by Shakti Gawain called “Creative Visualization”.

I hadn’t tried it yet, just read it.

A few weeks later while visiting my brother in Chicago, an ad for a Bobby Caldwell concert taking place in two weeks, caught my eye. I informed my brother that I would be back in two weeks if I could get a ticket to the show.

When I returned home, I noticed the Creative Visualization book sitting beside my bed, and decided to give it try.

Every night for the next two weeks, I went to sleep visualizing being at the Bobby Caldwell concert, hearing him sing “At Last”, and how that would make me feel.

I would play the CD and feel the feeling as if it were happening right then.

I called and bought my ticket.  Since I only needed one, I got a great seat on the 11th row.

When the time came, my daughter and I made the 500 mile (each way) trip to Chicago.

I was so excited.  I just knew he was going to sing my song.  I could feel it. After all, I had been feeling it and seeing it, every night for the past two weeks.

I found my way to the University campus (no GPS just an old fashioned map), where the concert was being held and went in and took my seat.

As I sat there waiting for the show, the lady beside me said, “Honey, I think the guy at the organ is trying to get your attention”.  I looked up and sure enough it looked like he was waving at me, so I waved back. I remembered talking to him after the show in Cleveland.

During intermission the keyboard guy came out to talk to me.  He said, “I don’t remember your name, or where it we met, but I remember you.  Would you like to come backstage and say hi to Bobby after the show?”  Well of course I would!
The concert was fantastic.  Even better than the first one, but he didn’t sing “At Last”.  As the show ended, I refused to believe that all my visualizing hadn’t worked.  It was such a great concert I couldn’t be disappointed.  Instead, I told myself that maybe this visualization stuff just took a bit longer than two weeks, and perhaps I would get to go to another concert and he would sing it then.

The keyboard guy came out and escorted me backstage to Mr. Caldwell’s dressing room. There were a lot of people in there so we just waited around until they all cleared out and Mr. Caldwell came over.

We started chatting and he signed my newest CD’s and commented that I looked familiar.  I mentioned I had seen the show in Cleveland and I had sent him my photo from that show and he had signed it for me. He asked if I had driven all the way from Cleveland to Chicago for this show.  I said, “No, I drove five hundred miles from WV, to see this show!” He then asked if I had enjoyed it.  “I loved it, I replied, but I was so hoping you would sing, “At Last”.”

He took me by the hand, and began singing “At Last”, right there, in the dressing room. It was not the way I had pictured it, and of course he didn’t sing the whole song, and there was no big band, but it was better than anything I had visualized.

I drove all five hundred miles home, on cloud nine.

Have you ever deliberately use visualization?

Did it work?  I'd love to hear all about it.  I love fun manifesting stories.

P.S. Have you signed up to receive my Lucky Life Newsletter?

It's Law of Attraction for Your Lucky Life!